How appropriate, the 50th restaurant post on this website is on Slater’s 50/50. Har^2. For Greg’s twenty-fifth birthday (which is today by the way – happy birthday Greg!), he chose Slater’s 50/50 in Anaheim. The eleven of us (his entire family + me + Ron) went to the restaurant right around 2pm last Sunday, and we had to wait half an hour. Needless to say, the place was packed. The place is famous for their namesake 50/50 burgers – 50% ground beef, 50% ground bacon, along with a pretty extensive selection of beers on tap, and the choice of building your own burger a la The Counter.

While the 50/50 burger sounds like quite the awesome idea on paper (bacon right in the burger patty? amazing no?), I had my fair share of reservations. The main concern that I had was that anytime you mixed something other than beef into the burger patty, it’s a danger warning. And I was afraid that this blend would take away from the best part of biting into a burger: the juiciness of the burger patty. But the restaurant has favorable reviews from Yelp (of course, take that with a grain of salt – but 1000+ reviews is impressive), and Greg was really looking forward to this. So of course like with any restaurant, I would come in with an open mind.

The whole table split the largest size of the appetizer combination plate, with six fried varieties of appetizers. All of the varieties were standard, oily, and okay.

The 50/50 ($9.95) – Designed to perfection our 50/50 burger topped with an over medium fried egg, avocado mash, pepper jack cheese and chipotle mayo

While just about everyone else chose to build their own burger (and give it cute/funny names), I chose to go with their standard 50/50 burger. Figured that using their signature choice as the benchmark is best. I think that the ground bacon in the patty has both pros and cons. The bacon gave the meat a good smokey, salty flavor. And the bacon that was on the outside of the patty aided in the charring of the patty itself with its crispiness. However, the bacon inside of the patty kind of dried the patty out a bit (a fear I noted earlier re: the blend being not as juicy as a standard burger). And they state that they have to cook the 50/50 patties well-done because of the bacon – don’t they know about the new FDA pork temperature standards? They’re the same as beef now. Enough with the patty, onto the other aspects: there was way too much bun, the fried egg was a decent touch, and the combination of the avocado mash (a.k.a. guacamole), pepper jack cheese, and chipotle mayo went surprisingly well together. Overall, a flawed burger with a novelty concept, but not without its merits either.

Being quite the self-proclaimed burger snob, eating the 50/50 burger was a little damaging to my supposed palate. But the taste of the burger was pretty good. If they can somehow master the actual cooking process (maybe sous vide the patty, then sear it at a very high temperature?), then I can see the burger becoming something amazing. For now, it’s just a place with a decent novelty burger, interesting selection of beers on tap, and the option to build the burger yourself.

This is a gem discovered by my girlfriend. I’ve only been here once before with her family so I ate a ton of food and I was very satisfied but didn’t feel like I could go ALL out (which we did this time around) for our early celebration of 3.5 year anniversary. Since I’m catching a flight to Asia in a couple of hours I will let the pictures do the talking this time. 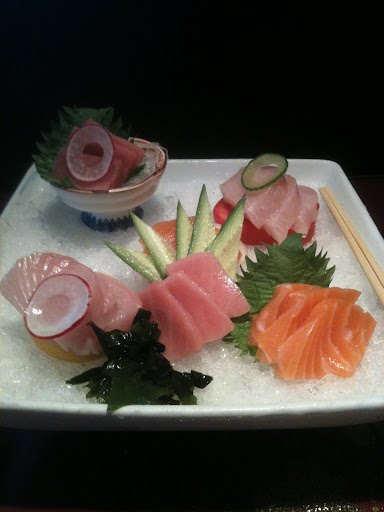 We had some crunchy spicy tuna chips to start things off that I forgot to take pictures of. Oops. Then we had a Han’s pick of sashimi platter: I picked 6 pieces of toro, salmon, and yellowtail each. Toro was amazing. Waitress told me I got two different fats and I felt one was a lot better than the other. Toro is the one in the middle and upper left. Yellow tail was my second favorite and salmon, as much as I like them, had to take a backseat to the other two for the day. 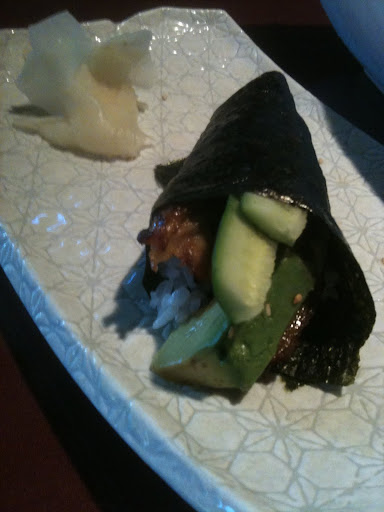 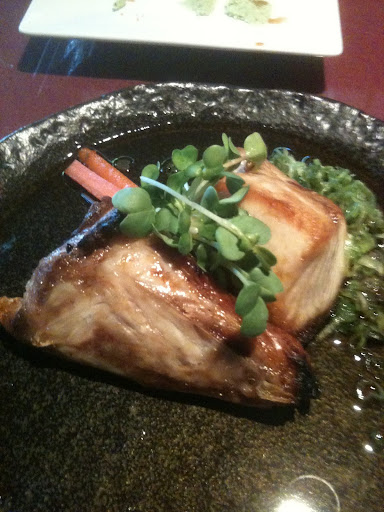 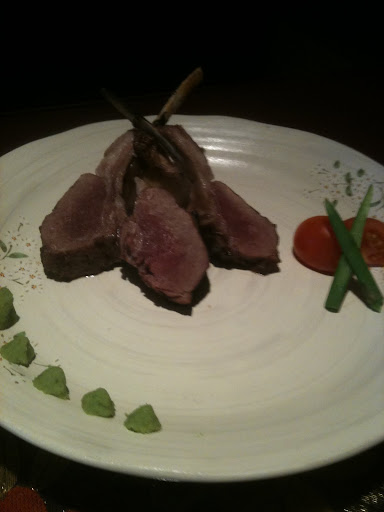 Lamb chop. I had the two with the bone obv and there was 0 meat left on them by the time I was done! 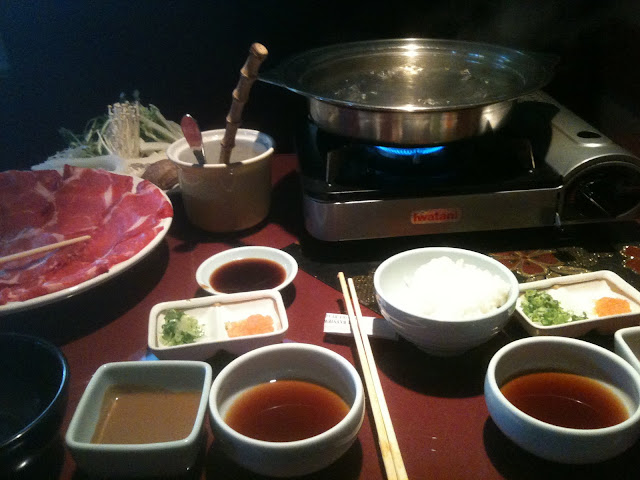 Regular beef shabu shabu: by then I was so full already but as a shabu shabu lover I had to keep going! 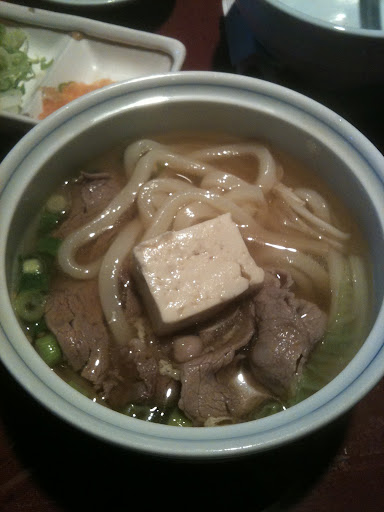 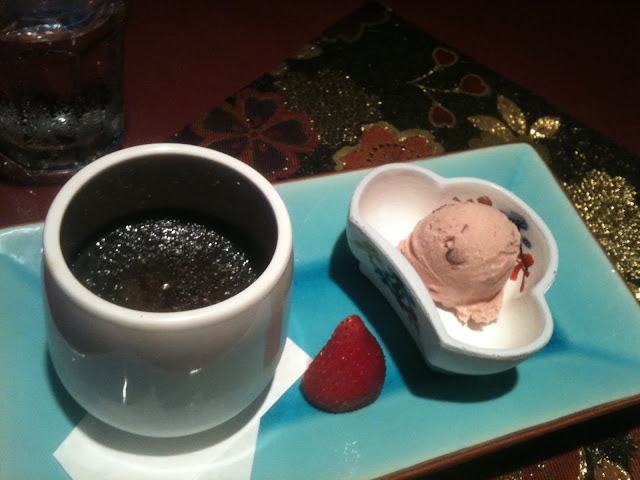 I enjoyed this meal very much. I think this restaurant is classified as a Japanese/American fusion restaurant. It was awesome!

Eating shabu shabu during summer is the equivalent of eating ice cream during winter: awesome. It’s normally eaten during winter time when the weather is less than ideal and despite having the good grace of living under the 25 latitude my whole life I have become a huge fan of shabu shabu / hot pot. The two are similar in concepts yet completely different in taste. The primary difference being the base that is used in the food. Shabu shabu is lighter in taste, more refreshing while the hot pot varies and more creative in terms of soup base, mostly due to the various regions that have added their own twists such as Sichuan with ultra spiciness or the Northeastern type where super sour vegetables are used. If there is one thing in common, it’s they’re all delicious. Ok fine there is one more thing that is common: they both involve the dipping your goods into various kinds of sauce. Today, I will be focusing on shabu shabu, the Japanese variation. However I’ve been fortunate to try all kinds of shabu before that were mentioned earlier at their locale.

Shabu shabu bar is located in Santa Ana next to a Chipotle. Second time here with mi lady as she took me here the first time for my birthday. I enjoyed it thoroughly so decided to come again for dinner. This time we were celebrating her kicking butt on an exam so I decided to that we should get the kobe beef plate (pictured above) for her while I had the prime beef. I had a few slices of hers and while texture was similar the taste is definitely a lot stronger that makes the other one bland in comparison. I found myself using the sesame sauce for almost all of my dipping. The vegetables were fresh and I learned from the first time they’d make a bowl of udon at the end of the meal with the leftovers so I rationed some of my vegetables and a couple slices of meat for the udon. Yum. Check it out:

No way I could have eaten dessert after the meal after a bowl of rice and ramen. It was a great meal. Shabu shabu / hot pots tend to run on the costlier side for a rather informal experience (expect $20 per person to be full without drinks) but man is it a treat. Most importantly, it’s a healthy treat if you don’t drink the soup. But who can resist the temptation?

Han Hu’s grade: not pretentious enough to have one