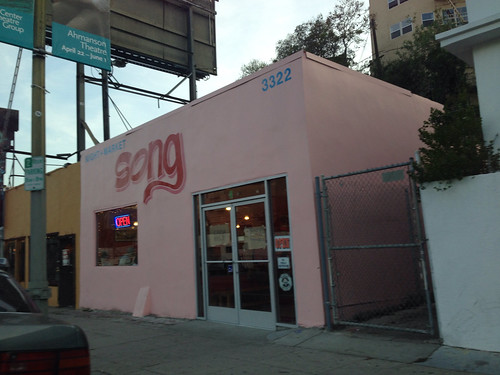 The 2nd location of Night + Market just opened in late March, and I was there shortly after. While I haven’t been back since (due to work and taking the bus to said work on most days), the fairly close proximity and the ease of parking in Hipster Central are both pluses in my book, as well as what I perceive as bigger portions for a couple of the dishes. The minus? Besides having to be around hipsters, the restaurant is still in a soft-open phase of sorts. That means: no reservations, less seating, slightly smaller menu, no alcohol (not even BYOB), and possible seizures from the psychedelic interior paint job.

But Kris is there every night, and he continues to bring it. Food is as good as ever, and it feels like you’re eating it out of Kris’ apartment. That level of comfort is more than welcome, almost as warm as the heat from that nam kao tod. “Night + Market Song” might mean Night + Market 2, but Night + Market’s song will forever be: 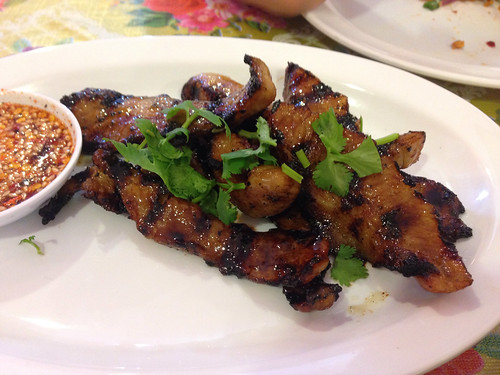 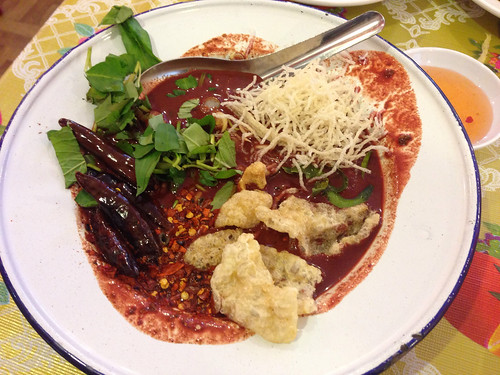 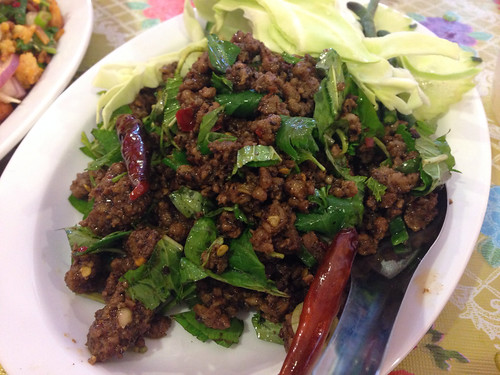 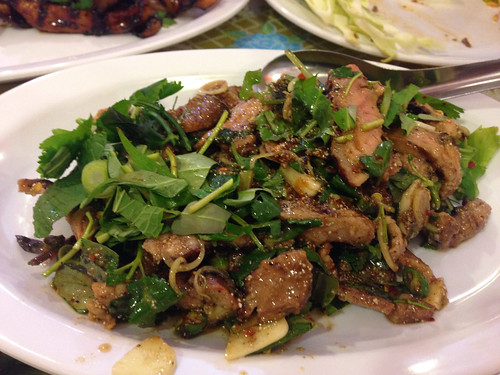 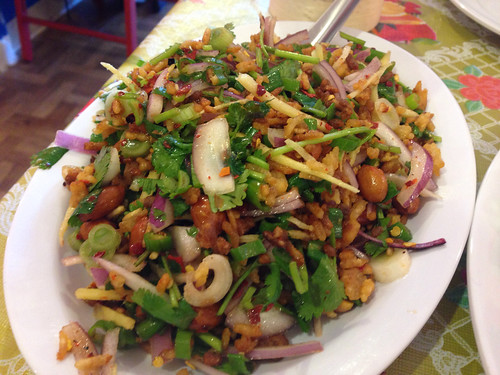 Grade: normally it’d be too early to determine, but food is as good as ever – so A- holds
Cuisine: Thai
Neighborhood: Silver Lake
Price: $$

What else can I say about Lotus of Siam in Las Vegas that hasn’t already been said by dozens of critics, hundreds of bloggers, and thousands of Yelpers? Not much, really. You know the drill: people behind Renu Nakorn in Norwalk moved to Las Vegas and took over the original Lotus of Siam, critical acclaim (J. Gold named it the best Thai restaurant in the U.S. a while back) and the crowds followed, and now it’s one of the most prominent restaurants in the city, and arguably the most influential Thai restaurant in the country.

During one of my trips to Las Vegas, we made it a goal to hit up off-Strip restaurants (which included Raku and Firefly), and of course Lotus was one of the restaurants on the hit list. They are still as busy as ever – I called ahead the day of for a reservation (highly recommended) and we still had to wait an additional 15 or so minutes. There was plenty of time to peruse the menu, but I did plenty of research beforehand. My advice would be to stick to the Specials/Northern Thai/Chef’s Choice, but definitely get the Nam Kao Tod from the appetizers section. The servers are also very knowledgeable about the dishes, and I’ve read that you can even have them send out dishes per chef’s choice.

As previously mentioned, Lotus specializes in Northern Thai/Isaan cuisine, which if I had to describe it to people, I would say that it’s less acidic and more…earthy? Just know that it’s not what most people are accustomed to, like pad thai and pad see ew, although Lotus does have all the standard dishes if you’re not feeling “adventurous” (but what’s the point of going if you’re not ordering what the restaurant specializes in?). In recent years, restaurants like Pok Pok are exposing the public to what Northern Thai food really is, as does Night+Market here in L.A. But people shouldn’t forget that Lotus (and Renu Nakorn before that – still around by the way) was the one who put the cuisine on the map.

So after all this hype, did the food at Lotus live up to expectations? It most definitely did. I have an unspoken allegiance of sorts to Night+Market, but Lotus is up there as one of my top-2 favorite Thai restaurants (I have yet to try Jitlada). Prices are very reasonable, but can be a bit pricey for the dishes in the Chef’s Choice section on the menu. Still, in a town that’s very expensive to dine in, especially on the Strip, you’re basically playing with house money paying for food of this caliber (and generous portions – for the most part, Thai restaurants are actually very stingy with portions in my opinion).

Below are photos of the dishes we ordered, all which I would order again, except maybe the garlic prawns, which were good, but not very Thai in execution (more of a pepper salt flavor) – I’d rather try another signature dish on my next visit. But it’s looking like a must-visit restaurant now, along with Raku, for my future Vegas trips. And for you wine aficionados, Lotus has a VERY extensive wine collection, notably Rieslings, which I’ve been told goes very well with the food there. The markup is apparently very low, and the collection is highly lauded.

Crispy Pork Gang isn’t a very well-known place in Thai Town. It gets overshadowed by the popular Ruen Pair next door. And there are at least a couple of dozen restaurants in the area that are more popular. However, I was attracted to what they were specializing in: crispy pork. Think about it – fried pork belly. Can’t get any better than that, right?

So I went after slurping a bowl of boat noodles from Sapp, around 11am on a Saturday. I was the only table. I ordered the crispy pork w/ morning glory, which was featured fairly recently as part of LA Weekly’s 100 Favorite Dishes column. The crispy pork is interesting – it’s only crispy initially, then the tiny porcine cubes kind of dissolve into dried, chewy pork belly. Not exactly a revelation, as I prefer my pork belly soft, melty fat pieces, but still a very enjoyable plate.

The pad gra pow, with the same crispy pork stir-fried with basil, garlic, Thai chili, and thousand year-old eggs, was actually a little better than the version w/ morning glory. I think the sauce for the pad gra pow was just better – the version w/ morning glory had a hot bean sauce of sorts. Overall, Crispy Pork Gang & Grill differentiates itself with some interesting dishes involving crispy pork, but doesn’t necessarily separates itself from the pack in Thai Town.

However, there is one amazing selling point for Crispy Pork: it’s open 24/7. That’s right. I didn’t stutter. Ruen Pair, GTFO with your 4am closings. If you’re hungry for some drunken grub after Harvard & Stone or just want to get a 4th meal in at 5am, this is your spot.

Most Asian cuisines have a soup noodle dish to call their own. The Japanese have the ramen, the Vietnamese have the pho, and we Chinese have the beef noodle soup. Less known (from what I know, at least outside of LA) is the Thais’ boat noodles. Upon first glance, the boat noodles look similar to the beef noodle soup with its dark, beef-based broth. But this cheap bowl of noodles is so much more. There are sweet and savory flavors, as well as some acidity and even some funkiness from…blood. I have to say, it’s so much more sophisticated than anyone gives it credit for.

Luckily, we live in LA, where not only the dish is appreciated and embraced, there are multiple restaurants that specialize in boat noodles alone. Most people nowadays gravitate towards the version at Pa-Ord, which I haven’t tried yet. But my favorite version is the one served at Sapp Coffee Shop. It’s not a coffee shop, for those of you wondering. It is one of those places that specialize in boat noodles, and man, do they do it well. Not that people don’t know about Sapp (it is a mainstay on Go[l]d’s 99 list), but I never see the place truly crowded.

In Sapp’s version: beef slices, balls, liver, tendon, tripe, chicharrones, and thin rice noodles in a very dark broth laced with bloody goodness. From what I’ve heard/read, this version is funkier and not as sweet as Pa-Ord’s version. And that sounds fine by me. Just different flavor profiles playing off each other well – all for the entry fee of $5.50. So if you’re in Thai Town and want to see what the fuss is with Thai boat noodles, go to Sapp Coffee Shop. And let me know if their coffee’s any good.

By the way, I also order the jade noodles to-go. This was highly recommended by fans of Sapp as an alternative to the boat noodles, even as a preferred choice for some. While I did indeed enjoy the noodles, they won’t dissuade me from ordering anything other than the boat noodles while I’m there. But for to-go, definitely.

Again, these photo don’t do the food justice. I highly recommend it for diners yearning for spicy food, Thai food, or just plain good food period.

Went by myself after work not too long ago. Ordered the awesome pig tail of course, plus tried a couple of the daily specials. Night + Market is basically my source for Northern Thai dishes, which I’m not at all familiar with outside of the restaurant. For instance, I was surprised that northern-style larb doesn’t have the acidity that I’m used to from typical larb dishes (quite the opposite really). But it was amazing. The Miang Pla Tu was very good as well – think Thai tuna salad, but with wonderfully fishy mackerel, and a nice balance of heat and acidity. You wrap the mackerel with the betel leaves (has a peppery taste), which is grown in-house. Had a nice extended chat with Chef Kris, who’s always gracious, and the staff makes me feel at home. I’m actually going to Lotus of Siam in Las Vegas this weekend, so hopefully my Northern Thai cuisine knowledge will improve even more.

Went back to Night+Market again with Ben and Danno a few weeks ago. Won’t say much since there are two posts already, but we tried a couple of new dishes, along with some favorites since it was Danno’s first time there (PIG TAIL FTW). I have to say, Chef Kris has really stepped it up during these last two dinners, and I find myself wanting to return more and more often. He even came out and chatted with us for a minute. Congrats on making the short list of James Beard Rising Star Chef of the Year, and thanks again for the wonderful food! And thanks for the pad thai (it was unexpected).

And by the way, I’m bumping the grade up.

O Hei There!
Blog at WordPress.com.