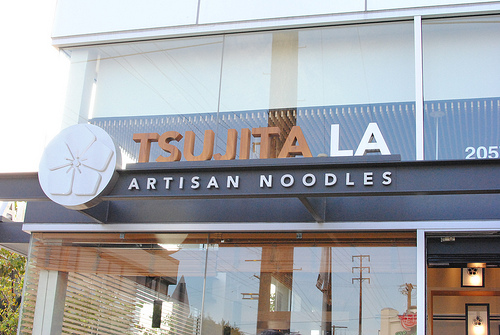 Another ramen place in LA? Well, not exactly…

Tsujita LA is the first of the ramen shops under the Tsujita name to open in the states. But before last month, no one would’ve known that. That’s because in their first months of opening, Tsujita LA only served Nobu-esque izakaya dishes. Why did it take so long? Apparently they wanted to make sure they perfected their ramen before making it available to the public (they even TTH’d and had a week-long test run in the Mar Vista Mitsuwa, daring to go head-to-head with Santouka). When it was finally deemed ready last month, Lawrence and I decided to give it a shot for lunch. Less than a week later, we took Daniel for another lunch. Were we that impressed to go twice in a week’s span? You bet!

When seated, you’ll notice the ceiling of sticks. Pretty cool actually. Tsujita is definitely a sexy place, way too sexy for a ramen shop (although I guess it fits in with their dinner concept). Menu is very simple: a few ramen options, the choice of making it a “combo” with a small tuna bowl, etc. But the star here is their tsukemen, or dipping ramen. Imagine a deconstructed ramen where the noodles came on the side and the broth is extremely concentrated and infused with more fishiness.

Lawrence got a spicy tuna bowl with his noodles on our first visit. It was decent. He learned his lesson the hard way though, in that the noodles themselves will fill you up plenty. It’s not like the portions of tsukemen are THAT big. But when you’re eating noodles with this potent and fatty broth, everything just feels heavier. You can feel the noodles expanding in your stomach, and the broth just sitting there, waiting to be sweated out (or glowed out, by yours truly).

So of course I ordered the tsukemen, the char-siu one at $13.95. Not the cheapest for a bowl of noodles, but they do give plenty of pork (and there’s even some simmered in the broth as well, along with a soft-boiled egg), and it really fills you up. The restaurant has these nifty guides at each table instructing patrons on how to truly eat tsukemen (see one of the photos above). Here’s my recap of the first time following these directions:

Pre-party – I had a sip of the soup before the noodles were placed in front of me. Damn that shit was oily and salty!

Step 1: I dipped the noodles into the soup, then ate it. What a pleasant surprise! The slightly cooled noodles held on to the soup very well, so you get a very potent kick of the soup when you eat the noodles. The combination of the porkiness and fishiness of the soup was really nice. Also, these noodles were a little different for the usual ramen noodles. A little bigger and chewier. The perfect vessel in my opinion.

Step 2: I put some lime juice onto the noodles, then dipped them into the soup again. The acidity from the lime really cuts down on the salt level of the soup, and brings the noodles to another taste dimension. A needed balance after the initial salt rush (however enjoyable it was). I also tried some of the chili power and spicy mustard leaf condiment that was at the table. The spicy mustard leaf was really good (think Chinese pickled veggies in a jar).

Step 3: I saved the remaining third of the broth for them to pour hot water in and make it a drinkable soup. The waitress took the bowl to the kitchen, and it was brought back a couple of minutes later, ready to slurp. It’s still quite oily and salty, but I managed to drink the whole bowl up. I then proceeded to barely stay awake for the next few hours at work. You can also do what Daniel did and make it like an actual ramen with the added water.

Overall, I was really impressed with having tsukemen for the first time. At first, I was trying to be more objective, telling myself what it couldn’t do in managing the oil and salt levels. But after fighting to stay awake at work, I began to think of what the tsukemen could do, and that was providing a satisfaction that lingered on my mind for days. For those who are familar with ramen, but not with tsukemen (probably the case with just about everyone sans Japanese natives), think of it as the Tim Tebow of the ramen world. You might think that only a pro-style QB like the tonkotsu ramen can succeed in the National Ramen League, but the tsukemen just wins, baby.