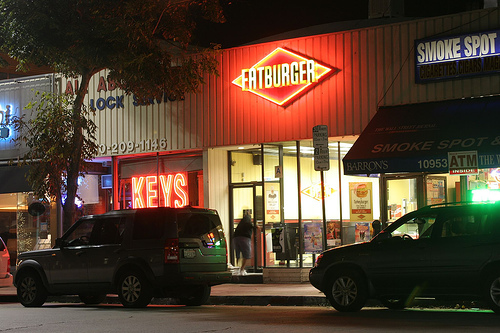 In our efforts to try something different after playing basketball, Ben suggested Fatburger, since he remembered passing by it near my apartment and had wanted to go back after a long absence, and I shared his sentiments. I remembered that there was one in Westwood, and since we were at Veteran Park we decided to go there since it’s the closest location. Fatburger, for a while, was seen as the rival to In-N-Out in Southern California for a while (before being dominated, of course). And I used to go there quite often when I was in high school, since there was one near my house. In recent years, it’s been kicked to the back of the burger bus, being overshadowed by all the gourmet burger joints and restaurants that have popped up (and not to mention In-N-Out’s increased stranglehold on the region and beyond).

I’ve been to this Fatburger in Westwood a few times, but quite frankly it barely crossed my mind during my years at UCLA, since it’s not exactly in the heart of Westwood Village, and…there was an In-N-Out. Ben said that he has never been here. He got a fatburger (1/3 lb. patty) with onion rings and I got a kingburger (1/2 lb.) with skinny fries. The patties are hand-formed and cooked medium, and the burger comes with the works – mustard, mayo, lettuce, tomatoes, pickles, relish, and onions. I actually thought that the burger was cooked better than the one I had at Hole in the Wall a week before, and wasn’t too far off from the masterpieces I’ve had at In-N-Out. Maybe it’s time I incorporated an occasional trip to Fatburger between my constant visits to the I word.

Note: credit teamperks on Flickr for the first photo.

7/5/11 update: After reviewing Father’s Office and giving it a B+ (along with my forthcoming review of Umami Burger), I felt that I could’t keep Fatburger at a B+ (and I couldn’t justify giving the other two places an A-), so I have to retroactively grade Fatburger a B.